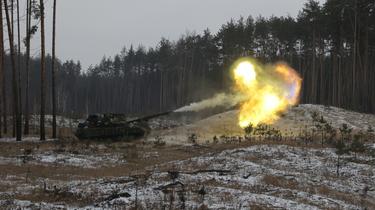 War in Ukraine: Leclerc, Leopard, Abrams… what tanks could be sent to Kyiv?

War in Ukraine: Leclerc, Leopard, Abrams… what tanks could be sent to Kyiv?

On Friday, January 20, Volodymyr Zelenskyy asked his western allies for tanks to fight against the Russian invasion. The French Leclerc tanks could be dispatched, as could the German Leopard 2 tanks and the American Abrams.

Weapons that could provide strong support to Ukraine. While Ukrainian President Volodymyr Zelebsky has asked his allies for help by sending tanks, which ones could be delivered to Kyiv? And what are the differences between the different models?

the German Leopard 2, with several advantages

Designed by the German manufacturer Krauss-Maffei and mass-produced from the late 1970s to replace the American M48 Patton tanks and then the Leopard 1 tank, the Leopard 2 combines firepower, mobility and protection.

This approximately sixty-ton MBT is equipped with a 120 mm caliber smoothbore gun that allows it to engage the enemy on the move. It can reach speeds of up to 70 km/h. In addition, the crew of four benefits from technological tools to locate and target the enemy at long range.

The Leopard 2 is considered by experts to be a “world-renowned weapon” capable of giving the decisive advantage on the battlefield.

While German Chancellor Olaf Scholz was evasive about a delivery of these tanks until then, two German media outlets said this Tuesday evening, January 24th, that he had finally agreed. The official green light will be given on Wednesday.

the Abrams tank, the American force

Numbered M1 and mass-produced in 1981, the Abrams tank is currently in service in nine countries including Morocco, Egypt and Australia.

Like the Leopar 2, it has a 120 mm gun and can reach speeds of up to 48 km/h in the field and 66 km/h on a normal road. However, one of its weak points is the lack of an automatic loader, forcing it to stop to reload manually.

When the United States multiplied promises of supplies to Ukraine, like Germany it was reluctant to provide its Abrams heavy tanks, citing difficulties in maintenance and training. But according to the Wall Street Journal this Tuesday, the American government is expected to announce the delivery of such tanks in Germany’s wake.

the char leclerc, the french weapon soon to be modernized

The Leclerc has been in use since 1993 and has been out of production since 2008. He has been deployed in Lebanon, Estonia and Lithuania in recent years.

The Leclerc, a 56-ton main battle tank for the French army, has a gun with a range of 4,000 meters and can fire up to six shells per minute while rolling. On January 12, France announced that it had ordered 50 refurbished Leclerc tanks.

In particular, its modernization includes additional shielding of the bottom and its side walls against explosive devices and the addition of a machine gun controlled from the inside. It will also be equipped with a new Scorpion combat information system and a high-speed radio system, allowing its integration into a “collaborative combat system”.

So far, France has not planned to deliver such equipment to Kyiv. But on Sunday, January 22, President Emmanuel Macron stated that “nothing is out of the question” but mentioned three conditions.