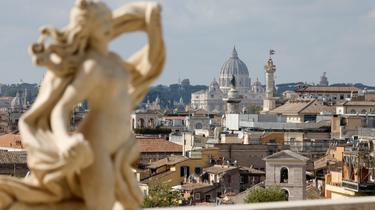 Vatican: The Holy See is launching an investigation 40 years after the disappearance of a teenager

Vatican: The Holy See is launching an investigation 40 years after the disappearance of a teenager

The Holy See has announced the opening of an investigation into the mysterious disappearance of a teenager from the Vatican in 1983, we learned Tuesday.

What happened to young Emanuela Orlandi in 1983? One of the Vatican’s most famous “cold cases” has just been relaunched. In fact, the disappearance of the young girl at the age of 15 is a case that has never been solved by the authorities.

The Italian, whose father worked for the Vatican, disappeared on June 22, 1983 after a music lesson in central Rome. Since then, many theses have been put forward, but the mystery remains. The Italians are closely following this tragic story in which the mafia, the secret services, the high authorities of the Vatican, but also Freemasonry are mixed up.

A former lover of Enrico de Pedis – the famous leader of the “la banda della Magliana” mafia group, who is also suspected of belonging to a group of Freemasons – claimed that he kidnapped the young girl and buried her body in concrete.

The Italian judiciary went so far as to have the godfather’s grave opened in 2012, but DNA analyzes revealed nothing.

Revelations in a documentary

This twisted case was the subject of a docu-series airing on Netflix in late 2022, in which Emanuela’s brother Pietro claims Pope Francis confessed to him: “She is in heaven”, implying – aloud to the family – that the Vatican knows what turned into a girl.

See also  New Caledonia: A woman in serious condition after being attacked by a shark

The documentary, in which testimony corroborates the kidnapping thesis, also gives the floor to a friend of the teenager, who claims Emanuela confided in her that she was “annoyed” by the sexual advances of a close friend of Pope John Paul II in the Vatican Gardens , a few days before his disappearance.

In 2019, at the request of family members, following a mysterious message received by their lawyer, the Vatican authorized the opening of the tombs of two princesses who died in the 19th-century Crusader Cemetery. but these contained no bones. Experts had also examined the remains found in two Holy See ossuaries, but to no avail.

The family’s lawyer, Laura Sgro, now wants to know the intentions of the Vatican judiciary.

“For years I have been demanding that certain personalities from the top of the Vatican be heard (…), unfortunately some have died in the meantime,” she regretted.

Despite the age of the case, Emanuela’s family continues to demand justice.