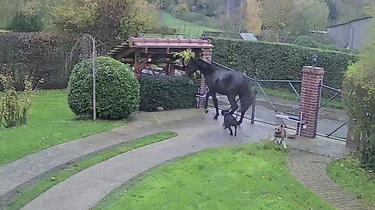 Var: a jogger who is brutally attacked by 2 Rottweilers

Var: a jogger who is brutally attacked by 2 Rottweilers

On January 11, in Draguignan (Var), a 55-year-old jogger was seriously injured by two off-leash Rottweilers. François Giannesini, a former soldier, told CNEWS he had to “try to protect the vital points” of his body. The public prosecutor’s office called for the euthanasia of the two dogs.

François Giannesini was attacked by two Rottweilers in Draguignan on January 11th and gave us a chilling testimony about his violent attack. This 55-year-old soldier “saw himself dying.”

The two Great Danes, perpetrators of the attack, were walking without a leash and their owner was very far behind when the attack took place.

“I tried to protect the vital points of my body by offering them my forearms, which they bit for a while before they managed to trip me,” he explains, specifying that “one of them hit me in bitten the calf and tore part of my muscles”.

The euthanasia of the two mastiffs demanded by the public prosecutor

That’s when the dog’s owner arrived, recalls the victim, for whom “it is clear that an elderly woman or even a child would have died in this attack”.

On Friday, the Draguignan public prosecutor announced his intention to request the euthanasia of the two mastiffs, even though “the behavioral analyzes were positive”, explained our Var-matin colleagues.

In fact, today this decision is motivated by the violence of the facts, since the risk of relapse is difficult to avoid. Now, however, it is the turn of the judge to decide on liberty and imprisonment. He now has eight days to make his decision.