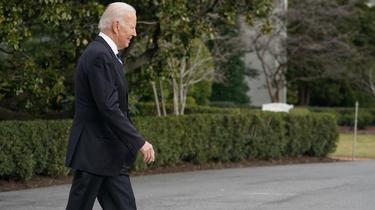 USA: Understand everything that documents the Joe Biden affair

USA: Understand everything that documents the Joe Biden affair

Several confidential documents were found in the home of Joe Biden, but also in the offices of a think tank once visited by the President of the United States. A very delicate matter for the head of state since he wants to run in the next elections.

Finally regaining popularity, Joe Biden has found himself in embarrassment since discovering confidential documents in the offices of a think tank where he officiated and in his own home. A very sensitive matter that could jeopardize the candidacy of the President of the United States for his re-election in 2024.

Which documents are involved?

Documents were first found last November in an office at the Penn Biden Center for Diplomacy and Global Engagement, a University of Pennsylvania-affiliated think tank where Joe Biden served as an honorary professor from 2017 to 2019, when Joe Biden was Vice President of the United States was (2009-2017). However, the case only hit the American press last week after it was spotted by CBS News, who learned the Chicago DA had been asked to review the documents in question.

According to information from CNN, the papers contained in particular memos from American intelligence agencies on subjects such as Ukraine, Great Britain and Iran. It would be a “small number” of documents, about ten according to American media, that do not contain nuclear secrets.

These classified documents were found by Joe Biden’s attorneys when they shut down this Washington office. They then informed the National Archives about the find and handed over the documents to them.

Between Thursday and last Saturday, the White House announced that a “small number” of confidential documents had again been found by his attorneys in Joe Biden’s private residence in Wilmington, Delaware. After their initial discovery at his former Washington office, his attorneys inspected his two private residences, where records “may have been transferred during the 2017 transition.” They claimed to have found a total of six pages of classified information near the home’s garage, which they immediately passed on to Justice Department officials.

Why does the discovery of these documents embarrass Joe Biden?

If this affair embarrasses Joe Biden, it’s because a 1978 statute, the Presidential Records Act, requires American presidents and vice presidents to send all their emails, letters, and other working documents to the at the end of their term National Archives. The documents of the Presidents and Vice-Presidents are to be sent to the archives immediately after leaving office. Another espionage law also prohibits keeping confidential documents in unauthorized and secure locations.

Following this discovery, Joe Biden pleaded “erroneous” and affirmed that these documents had been placed “inadvertently.” He said he was fully cooperating with the authorities and stressed that his lawyers immediately notified the National Archives and the Justice Department of the discovery of these documents.

However, opponents of the Democratic president have pointed to his lack of transparency as his teams waited two months and revelations in the press to acknowledge the discovery of the first documents, which were dated November.

Republicans on the House Judiciary Committee announced on Friday that they would launch an investigation into the discovery of these classified documents. Attorney General Merrick Garland has announced the appointment of a special counsel to investigate the case. It shames Joe Biden all the more as the Democrat continues to brag about his ethics compared to his predecessor, Donald Trump, who was also recognized for his administration of presidential archives.

See also  Climate: Australia is running to host the COP in 2026

Similarities to the Donald Trump case?

Most embarrassing for the Democratic president is the comparison to Donald Trump, who was also involved in managing the national archives. At the end of his term, Donald Trump left the White House with boxes full of confidential files. The National Archives then had to fight to recover them. In January 2022, they secured the return of 15 boxes full of Donald Trump’s documents, some of which had great historical value.

However, the National Agency was convinced it had not obtained all of Donald Trump’s documents and in February 2022 requested the federal judiciary to investigate. The FBI, after several months of investigations, estimated that the former president still kept documents in his luxurious Florida mansion, in Mar-a-Lago, and launched a spectacular search last August. This action enabled the salvage of around thirty more boxes. An investigation revealed that those boxes contained 18 documents classified as “top secret”, 53 as “secret” and 31 as “confidential”. In total, more than 300 documents had been taken away from Donald Trump at the end of his term in office. The key difference between Donald Trump’s case and Joe Biden’s is that the latter’s attorneys notified authorities as soon as they discovered the documents and forwarded them directly to the National Archives. He also claimed to take the case “very seriously” while Donald Trump had cried out for “political prosecution” after the FBI searched his home and denied his wrongdoing.