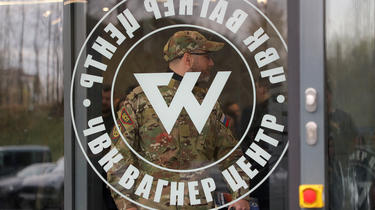 Propaganda posters, classified ads calling on Serbs to join the mercenaries for the fight in Ukraine… Since the beginning of January, the private paramilitary group Wagner has been trying to recruit in Serbia. Maneuvers sharply condemned by Serbian President Aleksandar Vucic.

“Why are you doing this to Serbia?” said head of state Aleksandar Vucic on January 16 in a television interview quoted by local news agency Beta. The publication of classified ads by the Wagner group in the local media to recruit Serbs to fight in Ukraine hit the Balkan country. Posters with the title “Wagner Group – Russian Knights” that were put up in the streets of Belgrade also outraged the Serbian president. “Why are you appealing, Wagner, if it’s against the rules?” he added.

While Russia is a close ally of Serbia, such comments are rare. In fact, the two countries maintain close cultural and historical ties, sharing the same orthodox religion and hatred of NATO. Despite condemning Russia’s invasion of Ukraine, Serbia is also – along with Belarus – the only European country to have refused to join Western sanctions against the Kremlin.

Some Serbian fighters have even fought with Russian-backed forces in Ukraine since the annexation of Crimea in 2014. However, the exact number of fighters was never released by the authorities.

Wagner on the front line in Ukraine

The Wagner Group, formed in 2014, recruited thousands of inmates to fight in Ukraine in exchange for reduced sentences. They are currently present in the Central African Republic and Mali and are regularly accused of abusing civilians in those countries.

See also  C l'hebdo: The program will be extended from January 7th

In Ukraine, the paramilitary unit has played a leading role since the invasion launched by Moscow in February 2022. Tens of thousands of Russian civilians have since landed in Serbia, one of the few exit doors into almost entirely closed European airspace to them.

Even if many Russians oppose the policies of their president, Vladimir Putin remains a hero for a large part of the Serbian population.