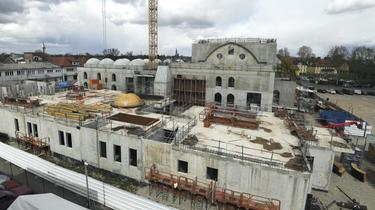 The Allonnes Mosque has reopened after being closed by the authorities

The Allonnes Mosque has reopened after being closed by the authorities

The managers of the Allonnes Mosque near Le Mans (Sarthe), which was closed for six months by prefectural decision at the end of October on charges of promoting a “radical practice of Islam”, asked the Council of State to obtain interim measures to lift them measure, her lawyers announced on Monday.

This Friday, the Allonnes (Sarthe) Mosque reopened its doors. It was closed for six months by prefectural decision at the end of October after allegations of promoting a “radical practice of Islam”.

The managers’ lawyers announced that they “have appealed to the judge in the Chambers of the Council of State” to have the measure overturned.

The latter stated in a press release that “the allegations made against the Allonnes Mosque are based on compelling allegations contained in “white notes”, unsigned and undated documents and emerging from the service information, excluding any precise and concrete element ” .

To justify its decision, the prefecture reiterated that “sermons and activities in this place of worship, attended by people belonging to or associated with the radical Islamist movement, the use of armed jihad, martyrdom and the commission of legitimizing acts of terrorism and the use of violence, hatred and discrimination, and enacting Sharia”.

A “serious attack” on religious freedom

In its complaint to the Administrative Court of Nantes, the Al Qalam association, which manages the mosque, took the view that the decree constituted “a serious attack” on religious freedom, since the 300 faithful would be “deprived of places of worship other than 70 kilometers away.

The Allonnes Mosque welcomes around 300 believers and houses a Koran school for around 110 children, “before whom armed jihad was valued and which is therefore a place of indoctrination,” the prefecture had also estimated.

See also  It all starts here: Who is France Renard, the new chef Vaton?
Share