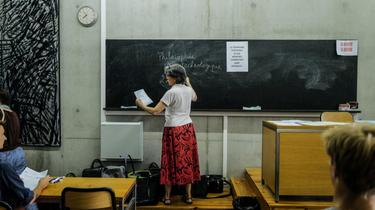 The number of candidates for the teachers’ competitions, whose registrations will be closed on Friday, will be slightly higher than last year, without “that being enough,” Education Minister Pap Ndiaye said on Sunday.

Pap Ndiaye said on Sunday that the number of candidates for teacher competitions was slightly higher than last year.

Given the shortage of applicants, the ministry extended enrollment in the first and second degrees (primary and secondary school) by two weeks. The Minister of Education did not give an exact number.

The teacher competitions are far from fully booked. At the end of July, more than 4,000 positions were vacant, prompting the Department of Education to draw on an increased pool of contract workers who were sometimes less skilled than the incumbents.

In addition to the salaries of the teachers, further projects can be expected from the national education system. In fact, the conditions of professional practice, the methods of training and the recruitment of teachers are among the avenues in which the minister is interested.

However, a reform in 2021 has just moved the teaching competitions from the first year of the master’s program to the second, after several changes to the program in recent years.

As in all public service, the percentage of people who register for competitions and don’t show up on D-Day “can be high,” Pap Ndiaye said. It “can even exceed 50%”, especially in the first degree, according to the minister.