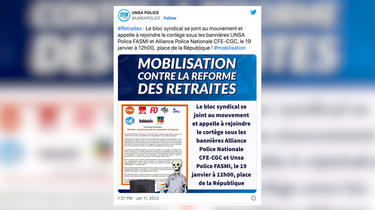 Strike against pension reform: what to expect on public transport in Ile-de-France?

Strike against pension reform: what to expect on public transport in Ile-de-France?

What can we expect in public transport on Thursday, January 19, when a cross-industry strike against the pension reform is planned? A “dark day” is looming.

The public transport situation in the Ile-de-France region is likely to be complicated next Thursday, notably because all the RATP unions have announced their intention to take part in this national interprofessional mobilization.

And if the first forecasts have not yet been communicated at the moment, the RATP agents already seem very motivated to participate in this mobilization.

Asked about this on Friday, former Prime Minister Jean Castex, now chairman of the RATP, said the unions had only “submitted basic, one-day strike notices”.

“I don’t know yet how the social movement will play out,” he also said, while the RATP and Transilien network’s first forecasts are due to fall on Tuesday 17 January.

In addition, the CGT-RATP announced that it had “maintained its December 4, 2019 strike cancellation against Emmanuel Macron’s previous ‘aborted’ pension reform” and intends to “keep this new reform in check” again.

“We will not allow it”

“Unsurprisingly, unfortunately, it is a celebration of socially harsh measures, a new collective punishment, and once again we will not budge,” the union said in a press release.

Indeed, Faouzi Abou Rayan, union representative of the CGT-RATP, wants “to create a unified procession at the head of the demonstration” so that it can be held by RATP agents, and this in order “to put pressure on the unions so that they don’t immediately put themselves to the test table to sign”.

See also  Chinese Astrology: What to Expect in the Year of the Water Rabbit

He, who lamented a few weeks ago that the RATP funds had not been increased for 10 years, today assures that the increase received was “just a smoke screen with the level of current inflation”.

In fact, last Friday the management of RATP had proposed a net salary increase of 1,365 euros for all employees for the year as part of the mandatory annual negotiations (NAO) taking place on the same day. That’s about 105 euros net per month.

The trade union organizations representing RATP-CGT, FO, Unsa and CFE-CGC have until January 23 to sign this agreement or not.