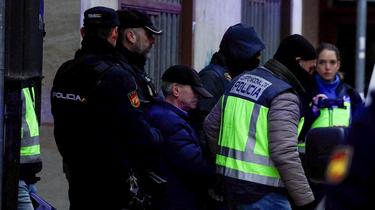 A sexton was killed and several people injured in a knife attack on a church in Algeciras, southern Spain, on Tuesday. The attacker was arrested and taken into custody. A preliminary investigation into “suspected acts of terrorism” has been initiated.

A sacristan was killed in a knife attack on Tuesday and several people were injured, including a priest. The incident happened shortly before 8 p.m. in and around the church of San Isidro in the southern Spanish city of Algeciras.

Local media said, based on testimonies, the attacker was armed with a machete, which he used to kill the sexton, who was outside the church.

A police source told AFP that he was wearing a djellaba and was “shouting something” at the time of the attack.

According to the Spanish Interior Ministry, “the person was arrested and taken into custody”.

An investigation into suspected acts of terrorism had been initiated, the public prosecutor said. The investigation will be conducted by a Magistrate of the National Audience, the court responsible for dealing with terrorism cases.

On Twitter, Juan Manuel Morenon, President of the Andalusian Junta, paid tribute to the victims and reminded that “the facts are still being investigated”.

Terrible and heartbreaking. A sacristan was killed and at least one other priest injured in an attack in Algeciras. Prudence, the facts are examined.

Intolerance will never have a place in our society.

See also  Toulon: He arrives at the emergency room with a grenade in the anus, the hospital is evacuated
Share