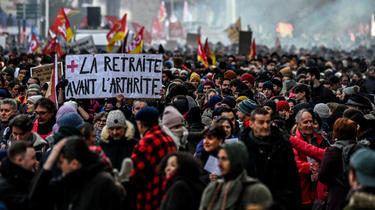 SNCF strike: what disruptions to expect this Friday 20 January?

SNCF strike: what disruptions to expect this Friday 20 January?

After the general mobilization against the pension reform, disruptions in the transport system in the Ile-de-France are still being registered, albeit isolated ones. This is especially true for the RER and the trains in the Paris suburbs.

Rail traffic in the Île-de-France is also disrupted this Friday, January 20, the day after the demonstrations against the pension reform.

In fact, SNCF Voyageurs indicated that “local social movements” were still ongoing. According to a press release, the company plans only 1 out of 2 trains for the RER C, 2 out of 3 trains on lines D, H, N and U and 9 out of 10 trains on the E.

On the other hand, operations on lines A, B, J, K, L, P and R must return to normal.

As a reminder, traffic was very disrupted on Thursday on the SNCF network in the Paris region, the first day of the mobilization against the pension reform, with less than 1 train out of 10 on half a dozen lines and many stations not served became.

RATP announces a return to normal

Unlike the SNCF lines, the RATP signaled a return to normal this Friday.

On Thursday, RATP metro and RER services in the Paris region were “very disrupted”. The situation with buses was better, but at least with a dozen broken lines.