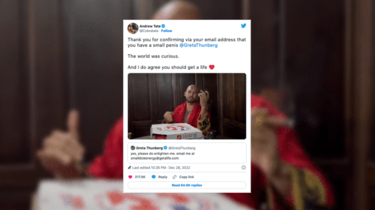 Pimping: Influencer Andrew Tate’s detention has been extended to February 27

Pimping: Influencer Andrew Tate’s detention has been extended to February 27

Influencer Andrew Tate and his brother Tristan have their detention in Romania extended by a month by the Bucharest court. The two Britons are accused of “forming an organized criminal group, human trafficking and rape”.

Andrew Tate remains in custody until February 27. A month after he was taken into police custody alongside his brother Tristan as part of a pimping investigation, the influencer known for his controversial videos and his clash with Greta Thunberg was the subject of an extension to his detention announced by the Bucharest court. The detention was originally supposed to end at the end of January.

“At the request of the prosecutor, the court has accepted the extension of the pre-trial detention of the two Tate brothers until February 27,” Ramona Bolla, spokeswoman for the prosecutor’s office responsible for fighting organized crime, told AFP (DIICOT). in Romania.

The two men were arrested and taken into custody on Thursday, December 29, after being suspected of human trafficking, rape and forming a criminal organization. At the end of this police custody, they were detained by the Bucharest court for a period of 30 days.

minors among the victims

The public prosecutor’s office has been investigating Andrew Tate and his brother since the beginning of 2021 because of a network that has existed since 2019.

Prosecutors revealed that several victims, including several minors, had been recruited “for the purpose of sexual exploitation”. At the time the two men were arrested, six potential victims had been identified. They would be women duped by Andrew Tate and his brother. The two men feigned romantic feelings towards them before forcing them into prostitution and producing pornographic films.

See also  Celine DIon: her moving message to her fans at Christmas time

Last spring, two women, including an American citizen, were freed by the police from the influencer’s property, the Romanian press reported.

A PROSTITUTION NETWORK AND GET RICH COACHING SITE

In total, the investigators had reported 15 cars, 14 luxury watches and “several sums of money” for a total of around 18 million lei or 3.6 million euros.

In addition to his work as a kickboxer, Andrew Tate became known for his appearance on the Big Brother Show in 2016. He dropped out of the competition after a video of him hitting a woman aired.

The young man then became famous on social networks against the background of numerous controversies because of misogynist statements. On the Internet, Andrew Tate presents himself as a young multi-millionaire and through his website “Hustler University” gives men advice on how to “get rich”.