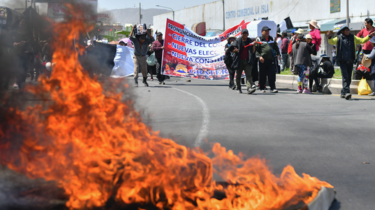 Peru: Machu Picchu was evacuated and closed to the public due to unrest in the country

Peru: Machu Picchu was evacuated and closed to the public due to unrest in the country

Around 400 foreign and local tourists who were stranded for several days at the foot of the famous Inca site Machu Picchu due to the demonstrations were evacuated to Cuzco (south) on Saturday, the tourism ministry said on Twitter.

Peru has decided to close Machu Picchu, the country’s main attraction, due to the unrest that has been rocking the country since December, the government announced on Saturday January 21. And this after evacuating nearly 400 foreign and local tourists stranded at the site for several days.

“This afternoon, 418 local (Peruvian) and foreign tourists were taken from the village of Machu Picchu to Cuzco,” the imperial and touristic capital of the Incas in Peru, the Ministry of Tourism said on Twitter.

The ministry released a photo of the train connecting the two cities and another tourist inside. Apart from walking, the train is the only way to reach this tourist gem. Piscacucho is the closest village connected to the road network.

Tourists were stranded for several days as protesters damaged the tracks. Tourists of all nationalities had signed up for evacuation on Friday lists in Aguas Calientes.

On Saturday morning, the authorities announced “the closure of the network of Inca Trails (land access, Inca Trail) and the Llaqta (Citadel) of Machu Picchu (…) due to the social situation and to ensure the safety of visitors”. , according to a press release from the Ministry of Culture.

A country under pressure

By December, around 300 tourists were already stranded in Machu Picchu before being evacuated by a special train carrying railroad workers to repair the tracks under law enforcement supervision. Tourism, vital to the economy, accounts for between 3 and 4% of GDP and provides employment for all sections of the population.

The morning was marked by a new fatality, a protester who died of his injuries during clashes between police and protesters in Ilave, in the Puno region (south, near Bolivia) on Friday. This brings the number of dead to 46 since December 7 and the beginning of the protests demanding the resignation of President Dina Boluarte, the dissolution of Parliament and the establishment of a Constituent Assembly. In addition, according to the mediator of the French Republic injured 772 people.

The unrest began after the sacking and arrest of left-wing President Pedro Castillo, who was accused of attempting a coup d’état by attempting to dissolve parliament in a bid to oust him from power.