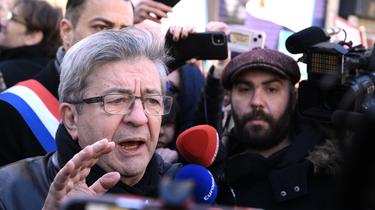 14,000 people demonstrated against the pension reform in Paris this Saturday, following the call from youth organizations but also from La France insoumise, according to the occurrence census carried out for Cnews and a media collective.

Despite the cold, 14,000 people took to the streets of Paris this Saturday to protest pension reform, according to event counting conducted for Cnews and a media collective. While the draft law, which in particular provides for the increase in the retirement age from 62 to 64, is presented to the Council of Ministers on Monday, tens of thousands of people of all generations have raised their voices between Place de la Bastille and Place de la Nation, without significant incident.

The leader of the Insoumis, Jean-Luc Mélenchon, present in the procession, reiterated that he was “cursing” Emmanuel Macron, whom he accused of wanting to “commodify our entire existence”. According to the former presidential candidate, raising the retirement age “won’t get a single person to work, I know that”. “There will be more unemployed, more sick people and, above all, less life,” he said. To then add: “They say that it is necessary to work more, for what? The key to the future is not to produce more disposable items. But produce better, and you have to work less for that.”