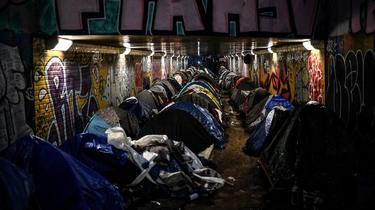 325 people – mostly new arrivals from Afghanistan – were housed in a makeshift camp under the subway on Boulevard de la Villette (19th) on Wednesday, January 18th.

“Early in the morning, the state services mobilized to guide people sleeping in the streets and group themselves together in shelters on the boulevard de la Villette,” said the Paris Police Headquarters (PP), which indicates that 168 of them “to the region (outside Ile-de-France)’ and 157 others were cared for ‘in Ile-de-France’. Migrants who will benefit from ‘an assessment of their administrative situation and social and health support’.

The evacuation took place early this morning on the Stalingrad Metro and required traffic to be halted on Boulevard de la Villette and in its continuity on Boulevard de la Chapelle. This is at least the fourth Ari shot taken there this winter, when a makeshift camp was set up under the Line 2 tracks, accommodating up to 771 people.

An operation carried out calmly, a testament to “the constant mobilization of the state to support vulnerable people”, explains the prefecture of the region and Ile-de-France (Prif) in a press release. According to the Prif and the PP, around 200,000 people in precarious situations are taken in every night, at least supported by shelters.

In 2022, no fewer than 19 “shelter operations” were carried out in the Paris region by the Paris Police Headquarters, which is estimated to have sheltered 6,668 people, including 1,399 family members. A total of 19,080 referrals “to the national reception system in the region under the National Program for Asylum Seekers and Refugee Integration (SNADAR)” would also have taken place.

See also  Notre-Dame de Paris: "We are resolutely approaching the reopening of the cathedral in 2024," assures General Georgelin
Share