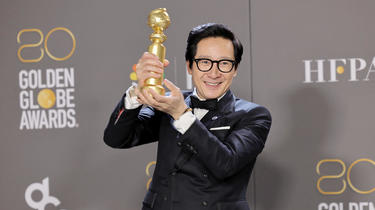 Marvel: Ke Huy Quan announces he has been contacted by Kevin Feige to join the MCU

Marvel: Ke Huy Quan announces he has been contacted by Kevin Feige to join the MCU

Guest of the Happy Sad Confusion podcast hosted by Josh Horowitz, actor Ke Huy Quan – crowned as Best Supporting Actor at the Golden Globes for the comedy Everything Everywhere All At Once – revealed that Kevin Feige was the first person who hadn’t been contacted him when the film was released to offer him to join the MCU.

What a change of situation! Withdrawn from film sets in 2002 due to lack of roles, actor Ke Huy Quan’s career is on the verge of rising from the ashes after his remarkable performance in the comedy Everything Everywhere All At Once, which earned him the title of Best Supporting Actor at the Golden Globes.

Speaking on the mic of the Happy Sad Confused podcast hosted by Josh Horowitz, the 51-year-old comedian revealed that the first person who contacted him on the day the film was released was none other than Marvel Studios big boss Kevin Feige. The latter offers him to move from one multiverse to another by joining the MCU (Marvel Cinematic Universe).

A career on hold

“When the movie came out, the first call I got was from Kevin Feige, kindly asking me to join the MCU. And I called the whole team and told them, you know what, nobody wants to hire me except Steven Spielberg, George Lucas, the Daniels and Kevin Feige. It’s incredible. 2022 is the year I will always remember because it’s one of the happiest of my life,” began the soon-to-be credited Loki season 2.

Expected throughout 2023, the series will be part of Phase 5 of the MCU, which will officially kick off with the film Ant-Man and the Wasp: Quantumania when it hits theaters on the 15th… next February . However, we don’t know the identity of the character he will play on screen.

Ke Huy Quan, best known for his roles in Indiana Jones and the Temple of Doom in 1984 and The Goonies, which filmed the following year, still with Steven Spielberg, returned to his difficulties finding roles thereafter , to the point where he decided in 2002 to put his acting career on hold.

“I did a TV show for CBS in 1986. But after that the roles got smaller and the opportunities dwindled – I could wait a year and a half between roles. If you look at my resume, some roles were really minor, so, you know, I waited a year and a half, worked a week, and waited another year before I was offered another audition.