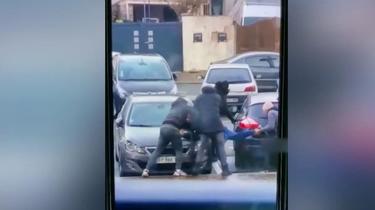 Kidnapping in the middle of the street in Villeparisis: the victim was found alive in his home

Kidnapping in the middle of the street in Villeparisis: the victim was found alive in his home

A 27-year-old man was violently kidnapped on January 8th in Villeparisis (Seine-et-Marne) and found this Thursday, January 19th, at his home in Argenteuil (Val-d’Oise).

A 27-year-old man was beaten in front of witnesses and forcibly locked in the trunk of a car in Villeparisis city center (Seine-et-Marne) on 8 January. Actively searched since then, he was found this Thursday, January 19 … at his home in Argenteuil (Val-d’Oise).

According to information from Le Parisien, which was confirmed by a CNEWS source familiar with the matter, the victim was located by investigators from the Meaux Criminal Investigation Department. The man has a broken nose and numerous bruises, but he is alive.

Apparently, he was heard by the police, but no information has yet been released about the identity of his attackers and the reasons for this kidnapping. The hypothesis of a reckoning was raised, but without being confirmed by the police.

Immediately after the events, the residents of the Place de l’Eglise, where the attack took place, expressed their surprise at this surreal scene, unusual in this neighborhood considered quiet. The police had initially concentrated in vain on the search for the kidnapping vehicle.

Given the violence of the scene and the passage of time, the worst was to be feared for the abductees. If the immediate danger now seems removed, it remains to be seen what may have happened to him in those ten long days under the radar.