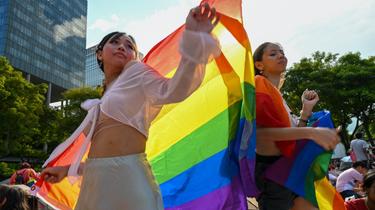 Homosexuality is “not a crime” but “a sin,” says Pope Francis

Homosexuality is “not a crime” but “a sin,” says Pope Francis

Pope Francis reiterated that homosexuality is not a “crime” but “a sin.” Still, he felt the laws criminalizing him around the world were “unfair.”

An official body. In an interview conducted by the American news agency “Associated Press” and broadcast this Wednesday, January 25, Pope Francis was asked to clarify the Vatican’s position on homosexuality. While affirming that this sexual orientation is “not a crime, but a sin,” the high priest recalled that he found all laws criminalizing homosexuality worldwide “unjust.”

“Being gay is not a crime,” he told the AP. “It’s not a crime, yes, but it’s a sin. But first, let’s distinguish between a sin and a crime,” he said. “It is also a sin not to love one another,” he recalled, citing his church’s catechism, according to which homosexuals are welcome there and should not be excluded.

While many priests still support discrimination against LGBT people, Pope Francis felt they should rather “engage in a process of conversion” and show “tenderness.” A speech in line with the new line advocated by the Vatican.

In fact, as early as 2021, the Congregation for the Doctrine of the Faith, an institution responsible for upholding Catholic dogma, had established an official position for the church by considering homosexuality a sin, not a crime.

In particular, the congregation had stated in a note published online that “God never stops blessing each of his sons, but he does not bless sin”. The institution also concluded that the Church “has not and cannot have any power to bless unions of persons of the same sex,” recalling that this text had been approved by the Pope.

An official position that therefore remains somewhat ambiguous and that does not reflect the efforts towards tolerance expressed by Pope Francis, who had made the hand outstretched to the homosexual community one of the hallmarks of his pontificate. As a reminder, 67 countries still criminalize homosexuality, 11 of which have the death penalty.