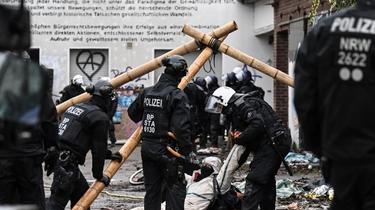 This Tuesday, January 17, environmental activist Greta Thunberg was arrested in Germany for demonstrating against the expansion of a coal mine in Lützerath.

Swedish environmental activist Greta Thunberg has been arrested by police amid a group of demonstrators who protested against the expansion of a coal mine in western Germany on Tuesday.

“The group (of protesters, editor’s note) is in custody,” said a police spokeswoman, adding that the anti-coal activists had gone “to the edge of the mine.”

On videos we see her, dressed in black, being detained by police and then being carried by them as part of their evacuation.

The moment climate activist Greta Thunberg was arrested by police in Germany.

The 20-year-old was among a group of environmental protesters demonstrating against the ongoing demolition of the village of Lützerath to make way for an expansion of the coal mine. pic.twitter.com/yWQU4DqwSW

The Swedish activist has been in Germany for several days to support opponents of the expansion of the country’s largest opencast mine in the Rhine river basin, which will soon engulf an abandoned hamlet called Lützerath.

This hamlet, occupied by climate activists who wanted to prevent its destruction, was evacuated by the police, who pulled out several hundred people who took refuge in trees and abandoned farms.

Despite the end of the multi-day police operation, the opponents are not giving up. They had organized a demonstration on Saturday that brought together more than 15,000 participants from all over Germany. Scuffles left dozens injured among the demonstrators and the police.