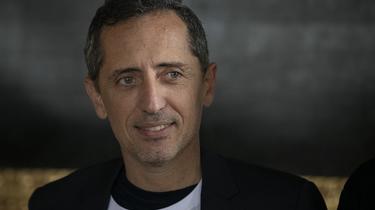 Gad Elmaleh: the comedian returns on Canal + with his show “D’ailleurs” on January 20th

Gad Elmaleh: the comedian returns on Canal + with his show “D’ailleurs” on January 20th

‘D’ailleurs’, Gad Elmaleh’s new solo on stage, was recorded at the Palais des Sports in early June 2022 and can be discovered on Canal + (and available on MyCanal) this Friday at 21:05.

For almost two years, the comedian has been touring France with this sixth show that mixes stand-up and characters. A show that happily celebrates its reunion with French audiences seven years after “Sans Tambour” and a show performed abroad in English.

“Old for young and young for old,” the comedian, in his fifties, is in the mood for very personal confessions, “reached the age when we can tell each other anything.”

From his relationships with his children to the madness of the Whatsapp groups, through his American adventure, between English classes, shows and evenings surrounded by Tom Cruise and Brad Pitt, but also his kidney stones or his “asymptomatic” alcoholism, Gad Elmaleh conjures up everything up, even his mother’s meeting (full of mistakes) with the Grimaldi family. The former partner of Charlotte Casiraghi undeniably puts on one of his best shows here.