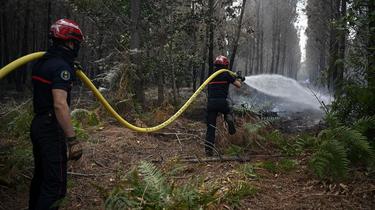 Fires in the Gironde: almost 40% of fire engines are still being repaired

Fires in the Gironde: almost 40% of fire engines are still being repaired

In the Gironde, after this summer’s fires, 40% of the fire engines deployed by firefighters are still out of service. They need to be repaired before the next wildfire season in March.

For the firefighters of the Gironde, this summer’s fires are not quite a thing of the past. Fighting the blaze has been so intense that today more than 40% of the Departmental Fire and Rescue Service (SDIS) wildfire-fighting fleet is out of service.

With the knowledge that on March 1st the next risky season begins, the mechanics are not idle. Typically around twenty machines are repaired by the team each month, but currently around sixty of these are unavailable. “Unheard of” according to Etienne Barthélémy, the captain of SDIS 33, who was interviewed by France 3.

“That’s not what they were made for”

The task is difficult but not surprising given the enormous workload that Gironde firefighters had to endure in July and August. In the face of massive fires, the trucks were in use around the clock for two months. And “that’s not what they’re made for,” emphasizes Captain Barthélémy.

In order to cover the entire Girondin territory from March 1st, the SDIS 33 must be able to mobilize “more than a hundred” firefighting vehicles out of the 160 in total. To do this, around thirty machines will be back on their wheels by the deadline, three a week.

“We will have them,” assures Etienne Barthélémy confidently. He specifies that certain vehicles to be repaired have been sent to external workshops so that the SDIS mechanics can focus exclusively on the forest fire engines.

However, the coming weeks promise to be busy, because in terms of firefighting, approaching is not allowed. These vehicles, destined to come into contact with fire, must guarantee 100% safety to the firefighters who use them.

See also  Italy: At least one dead and a dozen missing after a landslide on the island of Ischia
Share