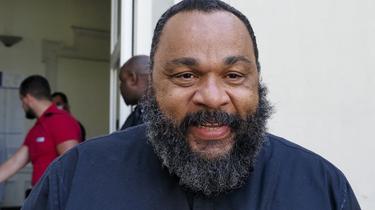 Dieudonné apologizes to “the Jewish community” in a Franco-Israeli newspaper.

Dieudonné apologizes to “the Jewish community” in a Franco-Israeli newspaper.

Dieudonné reportedly apologized to the Jewish community in a French-Israeli newspaper on Tuesday, January 10. After years of doing more than dubious sketches, the controversial comedian felt like apologizing to the people he’d hurt.

Unexpected Apology. Dieudonné, the comedian repeatedly convicted of racist insults and incitement to hatred, would have asked for forgiveness from his “compatriots in the Jewish community”, whom he may have offended with his comments over the years. Amazing news, confirmed by the person concerned from the newspaper Le Parisien. “I confirm that this forum in Israel Magazine is mine, it’s real, it’s not fake news,” he said.

“I have decided, after proofreading of course, to publish this text by Dieudonné, which I was originally supposed to meet with Francis Lalanne in Paris tonight,” Israel Magazine editor-in-chief André Darmon told the Parisian. “After thinking about it, I preferred that the humorist wrote what he had to say to those he had abused so badly, the Jews, and from whom he wanted to ask forgiveness. I just leave it to you judges, you readers,” he specified.

It was the artist Francis Lalanne who delivered the message entitled “Open letter from Monsieur Dieudonné Mbala Mbala to André Darmon and Israel Magazine” and entitled “I beg your forgiveness” to the Franco-Israeli newspaper. This rather short and sober text tells how the comedian realizes that in the past he has been able to shock and hurt the Jewish community through his multiple interventions.

“I would like to apologize to all those whom I may have offended, shocked, hurt by some of my artistic gestures. I am thinking in particular of my compatriots in the Jewish community, with whom I humbly confess that I have given myself up to the game of superiority,” writes the 56-year-old comedian.

“For all these mistakes and excesses, I ask your forgiveness. My goal was to make everyone laugh, and the Jewish community is part of my world,” he added, without giving any examples. He then hinted that he wanted to leave the scene “at peace” with himself, while still recalling the importance of the role of laughter and mockery in “restoring the broken connection.”

For his part, André Darmon clarified that he was “solicited by Francis Lalanne, who is a friend and who presented me with what appeared to be a real desire for repentance approach”. “I have therefore decided on a statement that I have submitted to our readers. I’m neither a judge nor a commissioner, it’s up to them to judge,” reasoned the editor of a newspaper that “defends the values ​​of the State of Israel. Zionism and Judaism,” he recalls.

As for the outrage and criticism that this publication could provoke, the man defends himself from any controversy and even claims to believe in the sincerity of the comedian. “I don’t owe anyone anything, Dieudonné or anyone else, I’m a free man and that seems sincere to me. On a spiritual level, you have to give someone who wants to repent a chance, but above all, time will tell if Dieudonné was sincere, it all depends on him,” concluded the Israel Magazine chief.

See also  Basketball: Victor Wembanyama impresses in his debut with the French team

If it is advisable not to doubt the humorist’s sincerity at first sight, a certain caution is also required in his statements, especially since he has been multiplying the gaffes for fifteen years and even staged the Holocaust denier Robert Faurisson on the Zenith stage in 2008 .

“Let’s get along, I’m not looking for an excuse, no extenuating circumstances, because nobody has one when they see that they have harmed their neighbor. Dieudonné concluded in his letter.