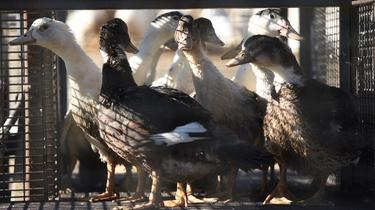 Death of a cat that tested positive in Deux-Sèvres

Death of a cat that tested positive in Deux-Sèvres

A cat living next to a duck farm infected with bird flu died in late December after testing positive for the H5N1 virus.

A first in France. A family cat from Deux-Sèvres has been euthanized after contracting bird flu, we learned on Tuesday from the Ministry of Agriculture, confirming information from Ouest-France.

“KEEP THESE ANIMALS AWAY FROM INFECTED FARMERS”

The animal, which was euthanized at the end of December due to deteriorating health, lived in a dwelling near a duck farm that was also affected and was completely slaughtered. The ministry specifies that “the detection of highly pathogenic avian influenza virus (HPAI) in mammals is a rare phenomenon” but “already observed”.

Marine mammals (grey seal, European otter) and land-dwellers (red fox, lynx or badger) have already been affected. “The susceptibility of cats and cats in general to HPAI virus has been known since 2004,” it adds.

According to the National Health Security Agency (ANSES), this is the first time a case of “cat infection with the highly pathogenic H5N1 avian influenza virus” has been observed in France. “Contamination of pets like cats could facilitate transmission of the virus to humans,” warned the agency, which calls for keeping these animals “away from infected farms and euthanasia homes from contaminated ducks.”

Avian flu is progressing in France at the heart of poultry farms, with 286 outbreaks registered by the authorities since August 1, marking the beginning of the 2022-2023 animal epidemic. As many as 4.6 million poultry have also been slaughtered since the same date, mostly between December and January.

See also  The number of jobseekers fell by 2.1% in November
Share