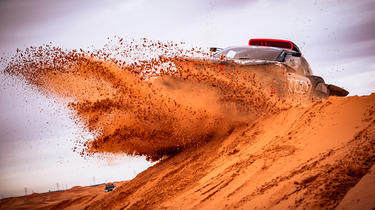 Defending champion Nasser al-Attiyah won the fifth Dakar of his career on Sunday 15 January ahead of Sébastien Loeb in the Auto category. In motorcycles, it was Argentinean Kevin Benavides who was crowned.

And five! Nasser al-Attiyah, already a Dakar winner in 2011, 2015, 2019 and 2022, this Sunday offered himself a fifth crown in the famous rally raid at the end of the final stage, won by Frenchman Guerlain Chicherit. The Qatari, who overtook legend Ari Vatanen in the winner’s list, was more than an hour ahead of Sébastien Loeb and young Brazilian Lucas Moraes. Nasser al-Attiyah, in the lead since the third stage, was able to take advantage of the setbacks of his main rivals, who bit the dust of the Saudi desert one after the other, and use his large lead in the standings to defend his title.

“I am very happy to win the Dakar again and to have kept my title. The weather conditions of this Dakar were really difficult for everyone. Mathieu (Baumel, his co-driver) did a great job,” said Nasser al-Attiyah, who let his competitors fight for the podium.

And finally it was Sébastien Loeb who made the 2nd step after an incredible comeback. The nine-time World Rally Champion, who had dropped to 31st after the first two stages due to multiple punctures, did not give up on a fourth podium in seven outings.

Six stage wins in a row for Sébastien Loeb

“After starting the rally we had we couldn’t have hoped for anything better. In any case, Nasser was regularly unplayable. He had a good race, he didn’t make any mistakes. We have to be satisfied with what we have, we made a good comeback, a great second part of the rally, it’s not that bad,” the Alsatian confided. But if he failed again in his battle for the Dakar, Sébastien Loeb can console himself with his seven stage victories in this edition and, above all, with his six wins in a row. An unprecedented achievement in the history of the Dakar.

In motorcycling, on the other hand, everything was decided on the last day. And Argentinian Kevin Benavides emerged victorious, beating Australian Toby Price by 43 seconds after 15 days of racing. “It’s incredible. It’s a dream, it’s my second victory at the Dakar. This edition was incredible. We fought a lot with Toby (Price) and Skyler (Howes). It was very close,” said a happy Kevin Benavides.