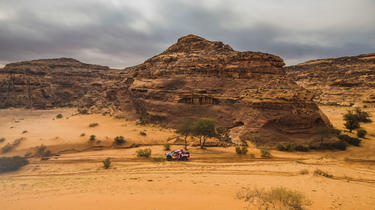 Carlos Sainz lost control of his vehicle and rolled over just a few kilometers after the start of Stage 9 of the Dakar 2023 on Tuesday 10th January. The remainder of his participation in the event is highly uncertain.

End of adventure for Carlos Sainz at the Dakar 2023? Already the victim of a serious accident on Friday, the Spaniard lost just six kilometers after the start of 9th placee Stage. With his co-driver Lucas Cruz, they survived this accident unharmed despite chest pain on the right side, but the rest of their participation remains unexplained.

First recordings of @CSainz_oficial and @LucasCruz74‘s fall, after only 6 km in the special. #Dakar2023 pic.twitter.com/se7SKV27YD

They were initially treated to take them to the hospital in Ryad as a precautionary measure to be examined. But “wanting to give himself a chance to resume racing, the Spaniard, on the way to the hospital, asked the medical helicopter to turn around to accompany him to his car. He is therefore waiting again with Lucas Cruz for their assistance vehicle,” the organizers said. Whether they can resume racing remains to be seen.

New episode in @CSainz_oficial Saga on stage 9: The Spaniard asked the medical helicopter to turn around on the way to the hospital and take him to his car. He’s back with Lucas Cruz now, waiting for their support vehicle. #Dakar2023

A three-time winner of the event in 2010, 2018 and 2020, the two-time World Rally Champion can no longer boast a fourth success in the famous rally raid. At the start of the stage he was only 100th in the standings, more than 29 hours behind leader Nasser al-Attiyah.