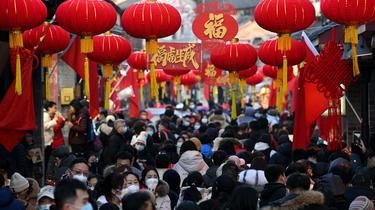 China’s population could halve by 2100

China’s population could halve by 2100

For the first time in six decades, China recorded a population decline in 2022. The country hit by a demographic crisis could lose up to half of its population by 2100.

This is a historic turning point for China. The world’s most populous country (1.4 billion people), home to a sixth of the world’s inhabitants, saw its population decrease by more than 800,000 people in 2022.

This is a first since 1960-1961, when a famine that began in 1959 killed tens of millions after Mao’s disastrous “Great Leap Forward” policy.

Worse still, China’s population could be shrinking by an average of 1.1% each year, according to a study by the Shanghai Academy of Social Sciences, whose data was shared with AFP. According to these demographers’ most pessimistic forecasts, China could have a population of just 587 million by 2100, less than half of today.

cost of living and education

Paradoxically, this decline occurs despite the relaxation of birth control policies. Ten years ago, the Chinese were only allowed to have one child. Since 2021 they are allowed to have three.

But the Chinese, especially young people, don’t seem to want more children. This is due to the rising cost of living and education, as well as a higher level of education among women, which also delays pregnancy.

See also  Simon Coleman: the continuation of the series in the making

However, many local authorities have taken action to encourage couples to procreate. For example, metropolitan Shenzhen offers birth bonuses and allowances up to the child’s 3rd year, while Shandong province offers 158 days of maternity leave from the first child, 60 days more than the national standard. .

This demographic crisis is a concern for the Chinese authorities. The declining and aging of the population could indeed have a profound impact on the country’s economy, particularly its competitiveness and pension system.