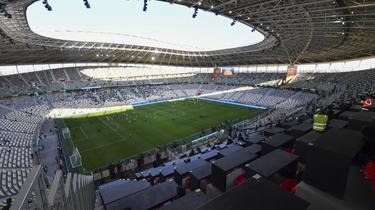 CHAN 2023: an investigation launched by CAF after the events during the opening ceremony in Algiers

CHAN 2023: an investigation launched by CAF after the events during the opening ceremony in Algiers

The African Football Association launched an investigation this Sunday following the events during the opening ceremony of CHAN 2023 in Algeria.

The Confederation of African Football announced Sunday it would launch an investigation after Nelson Mandela’s grandson pleaded for support for Sahrawi separatists at the opening of the Africa Nations Cup in Algeria.

The Moroccan Football Federation, which has given up sending its team to Algeria because it lacks authorization to come with its company Royal Air Maroc (Algiers), closed its airspace on 22 Rabat, ed. Red.), have asked CAF to “take all responsibility for these flagrant violations, which are unrelated to the principles and values ​​​​of the round ball”.

The latter replied on Sunday that it “will conduct an investigation to determine whether and to what extent these statements violate the statutes and regulations of the CAF and FIFA”. CAF “will report its conclusions in due course,” continues the press release, which immediately states that “these political statements are not those of CAF (…) as a politically neutral organization.”

During the opening ceremony of CHAN in Algiers, Mandla Mandela, a supporter of the Sahrawi separatists of the Polisario Front, had called for “fighting for the liberation of Western Sahara from oppression” and described this area as “the last colony in Africa”. Morocco immediately condemned “malicious acts” and “despicable manoeuvres”.

A national cause for Morocco, Western Sahara is a former Spanish colony that has been disputed for decades between Morocco and the Algiers-backed Polisario Front. It is considered a “non-self-governing territory” by the United Nations.

See also  Repression in Iran: The UN opens an investigation

At Nelson Mandela Stadium in Algiers, the anti-apartheid icon’s grandson also called for the “liberation of Palestine,” in open criticism of Morocco, which normalized relations with Israel two years ago.

In its press release, the FRMF also denounced anti-Moroccan “racist remarks” made during the opening ceremony at the stadium. Videos circulating on social media show Algerian supporters chanting anti-Moroccan slogans.