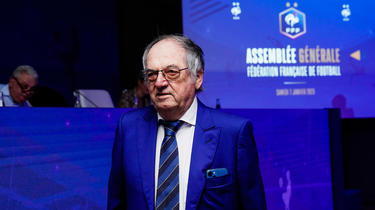 Case of Noël Le Graët: what to remember from the last Executive Committee of the FFF

Case of Noël Le Graët: what to remember from the last Executive Committee of the FFF

A week after the resignation of Noël Le Graët from the presidency of the FFF, the executive committee of the body met this Thursday, January 19 and discussed in particular the situation of the chairman. Here’s what to remember.

Status quo at the top of the FFF. A week after the decision to withdraw Noël Le Graët from the panel’s presidency, the Executive Committee met again this Thursday via videoconference without the 81-year-old chairman, who is currently on vacation in Martinique, and without the LFP’s President, Vincent Labrune New York travel. And Comex members mentioned in particular the situation of Noël Le Graët following the opening of an investigation earlier in the week by the Paris prosecutor’s office into moral and sexual harassment.

And at the end of the meeting, they did not make any new decisions and decided not to change anything for the time being. “The Executive Committee of the FFF, which met this Thursday, January 19, took note of the decision of the Paris Public Prosecutor’s Office to launch an investigation into Noël Le Graët, President of the FFF. With no further information at this time and in accordance with the presumption of innocence, Comex remains in its position to remove the President of the Federation pending final communication of the investigation carried out by the Ministry of Sport and its analysis by the Comex of the FFF,” read a press release .

Philippe Diallo will therefore continue to work on an interim basis as President and General Manager until the report of the auditors responsible for clarifying the malfunctions within the body. A preliminary report must be submitted at the end of January and Noël Le Graët and Florence Hardouin have fifteen days to defend themselves in writing. And it was only with the publication of the final report in mid-February that Comex finally took a position on the fate of Noël Le Graët.

The latter, incensed after his statements against Zinedine Zidane and his behavior that was seen as sexist, struggled to deny the allegations against him and attacked the leaks organized “through the press”. He also scratched at the “interference and political pressure” from the government and in particular from sports minister Amélie Oudéa-Castéra.

See also  Notre-Dame de Paris: the scaffolding that will rebuild the soon to be completed tower
Share