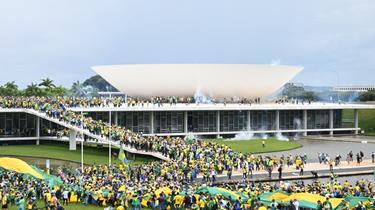 Brazilian authorities arrested Anderson Torres, Jair Bolsonaro’s former justice minister, on Saturday. The former far-right president is himself the subject of an investigation into his role in the looting of national institutions on January 8 in Brasilia.

Investigations continue following the January 8 attack on Brazilian institutions by supporters of former President Jair Bolsonaro in Brasilia. This Saturday, January 14, the Secretary of Security for the Federal District of Brasilia, Anderson Torres, was arrested upon his arrival at Brasilia Airport. He “has been taken into custody and will continue to be available to the judiciary,” said the federal police.

Former Jair Bolsonaro Attorney General Anderson Torres was traveling in the United States at the time of the violence. However, since he was suspected of complicity with the rioters, he had been the subject of an arrest warrant.

His executive secretary, Fernando de Sousa Oliveira, who deputized for him in his absence, is also under investigation. According to a Brazilian press record, he described the pro-Bolsonaro demonstration as “peaceful” minutes before the invasion of Congress, the presidential palace and the Federal Court of Justice (TSF).

Anderson Torres is also concerned about the discovery at his home of a three-page document linked to the Oct. 2-30 presidential election. This provided for the federal government to take control of the Superior Electoral Tribunal (TSE), which oversees the smooth running of the election “to ensure the maintenance and restoration of transparency and to authorize the regularity of the electoral process of the presidential election. from 2022”. A measure considered unconstitutional by many lawyers, which could have led to Lula’s election being annulled.

The presidential decree – which never saw the light of day – provided for the establishment of an “election regulation commission” to replace the TSE, led by a majority of Defense Ministry members (8 out of 17). The document is undated, but Jair Bolsonaro’s name is at the end in a space provided for his signature.

Anderson Torres said on Twitter Thursday night that this draft is “probably in a stack of documents that are scheduled to be destroyed in due course,” and claimed that his disclosure was taken out of context.

“The arrest of Anderson Torres brings us closer to identifying the network that made this terrorist attack possible,” Justice Minister Flavio Dino said.

A video shared by Bolsonaro targeted by investigators

Anderson Torres’ arrest comes the day after Supreme Court Justice Alexandre de Moraes announced the Attorney General’s request to include Jair Bolsonaro in his investigation into the possible instigators of this violence.

The former head of state “publicly called for the execution of a crime” by broadcasting a video on social networks “questioning the regularity of the 2022 presidential election,” prosecutors said in a statement. This video was released two days after thousands of Bolsonarists invaded the headquarters of the Presidency, Congress and the Supreme Court, and then deleted, prosecutors said. According to him, it could provide “evidence” warranting “a global investigation into the former populist leader’s actions before and after January 8, 2023.”

Jair Bolsonaro “never had the slightest connection or involvement in these movements,” his lawyers said in a press release shared with AFP, attributing the violence in Brasilia to “planted” elements.

Jair Bolsonaro, who has been in the United States since late December, was also pinned on Friday for huge spending with the president’s bank card during his tenure.