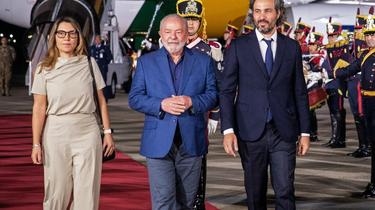 Brazil and Argentina are relaunching the project of a common currency

Brazil and Argentina are relaunching the project of a common currency

Brazil and Argentina are considering creating a common currency to boost regional trade and reduce their dependence on the US dollar. If the project remains blocked during the negotiation phase, it could become the second largest currency union in the world.

A future strategic alliance. At the end of a summit of the Community of Latin American and Caribbean States (Celac), the presidents of Brazil and Argentina announced a reconciliation of their positions on the creation of a common currency, the aim of which would be to stimulate regional trade and reduce their dependence on the American dollar , revealed the Financial Times.

With this in mind, this potential union should first revolve around the two largest economies in the region, Brazil and Argentina, before progressively integrating other countries, starting with those of Mercosur (Uruguay and Paraguay). The new currency could be called “sur” (“south” in French) and will initially function alongside the Brazilian real and Argentine peso. Ultimately, it could account for around 5% of global GDP.

“Two brotherly peoples meet again. A relationship that should never have been interrupted and that revives the history of Latin American fraternity., said Alberto Fernández and Lula da Silva in a document released after their bilateral meeting last Sunday.

Today begins a new era in Argentina-Brazil relations, a deep bond that will last for decades.

My beloved @LulaOficial, this is your house. Latin America dreamed of your return and today embraces you again pic.twitter.com/MF6wEVcELS

However, this huge project was not to see the light of day immediately. If the idea had already arisen in the past in the authorities of both countries, all talks had failed, in particular due to the systematic resistance of Brazil’s central bank and a lack of political support.

See also  In which country do you need an international driver's license?

And with good reason, when Brazil and Argentina are the two largest economies in the region, together accounting for almost 26.1% of South America’s GDP, the gap between the two neighbors is very wide. Up until the 1970s, Brazil was an economic “dwarf” with a lower GDP than Argentina. But that is no longer the case today. In 2021, Brazil’s GDP weighed $1.609 billion, or 3.3 times its Argentine equivalent.

In addition, the Brazilian economy is much more independent than its Argentine neighbor due to its international structure and development. Although Argentina is highly integrated into the Brazilian economy (20.4% of imports and 14% of exports), the opposite is not true. Exports from Brazil to Argentina represent only 9.5% of foreign trade, less than to the European Union (10%), the United States (11%), but mostly to China (32%).

Such a system would therefore create many imbalances between these two economies, of an even greater magnitude observed between some euro signatory countries. Inflation, for example, is not at all the same in both countries. About 5.2% for Brazil in 2022, compared to almost 94.8% for Argentina.

While Argentina could of course be attracted by the prospect of a stable currency and access to global capital markets (which is currently not the case for the peso, which has lost 98% of its value against the dollar in 15 years), Brazilians, their currency relatively stable (although not very valuable, around 19 cents of the dollar), might hesitate to abandon the real.

From a purely commercial point of view, such an agreement could also hit the Argentine economy hard, in particular due to the freezing of exchange rates, a sine qua non of the project to ensure its viability. In addition, the effect of this currency stabilization could be costly for Argentina, which would have to adapt to the new needs of the Brazilian market and adjust its industrial production to gain a comparative advantage that it has not had for several decades.

See also  FTX: Why Did This Cryptocurrency Champion Collapse?

For all these reasons, Argentina is not an ideal partner for Brazil, and Brazil could assume a position of dominance that Argentina would not accommodate.

Get out of the dollar dependency

However, recent elections by left-wing leaders in both countries have brought their positions closer together and given the project greater political support. In fact, both countries, including Brazil, could benefit from the success of such an initiative. First, because the two countries are facing significant economic difficulties, and second, because strengthening an alliance of Mercosur countries would allow trade deals to be renegotiated with other regions, including the European Union, which is currently at a standstill.

But the main goal, which the two presidents openly state, is above all to reduce the dollar dependence of South American trade. The dollar currently plays a prominent role in the region. In Ecuador, as in El Salvador and Panama, it is the only legal tender. In Argentina or Venezuela, it is a substitute currency for the local currency, which citizens have little trust in. In general, it is largely the currency used for these emerging countries’ external debt, but also for trade relations.

Specifically, this dependency significantly weakens the economies of these countries, which are thus dependent on American monetary policy. For example, when the Fed tightens policy, as it is doing now, central banks need to raise rates faster to maintain their currency’s value against the dollar and avoid currency or financial crises. Breaking out of this dependency is therefore a top priority for these countries and the sur could partially replace the dollar in trade and finance.

Keep China and the United States in check

See also  What is this growing scam?

In addition, this project could represent a strategic geopolitical opportunity for Latin America, and Brazil in particular, at a time when world capitalism is organizing into large zones of influence centered on China and the United States. Like what the European Union is trying to create, this new economic zone epitomized by the “Über” could put the region in an equidistant and relatively independent position from the two great powers, while reaping the benefits of both.

On the one hand, the aim would be to gradually break away from dependence on the dollar and the USA, while at the same time keeping Beijing’s growing influence on trade relations in the region at bay. The creation of the “on” could embody this vision and, on the other hand, strengthen the bilateral relationship between Brazil and Argentina, which would tend to bring the two economies closer together.

To do this, the two central banks of Brasilia and Buenos Aires must meet in mid-February to start talks on this topic. Above all, they must reach an agreement on a guarantee system for bilateral trade, thereby “speeding up the process of supply and export of Brazilian companies to Argentina, as well as the supply of Argentine companies to Brazilian companies”.

A complex but not impossible project

While the Brazilian and Argentinian leaders are likely to face many obstacles to carry out a project of this magnitude, it remains long-term viable and already raises great hopes in the region. The governments of the two countries are well aware of these potential difficulties and still prefer to exercise great caution.

“I don’t want to give false hope, this is the first step on a long road that Latin America has to go,” Argentina’s Economy Minister Sergio Massa told the Financial Times.