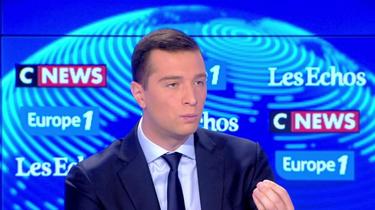 Bardella: “France has a model of unlimited social generosity”

Bardella: “France has a model of unlimited social generosity”

Le Grand Rendez-Vous, on CNEWS, welcomed Jordan Bardella this Sunday, January 22nd. The opportunity for the President of the National Rally to address one of his favorite topics: immigration.

A country as El Dorado? As a guest of this Sunday’s Grand Rendez-Vous on CNEWS, Jordan Bardella returned to the demographic shifts to come in the years to come. In his opinion, the fact that Africa will have a population of 2.5 billion in 2050, while Europeans will have 450 million (700 million according to the UN, editor’s note) “raises questions and challenges”. the first being “controlling our borders”.

For the President of the Rallye National, “France is one of the most attractive countries for this immigration because of a model of unlimited social generosity”. Which, in his opinion, should be fixed, which the government draft expected in a few days will not do.

For this reason, the far-right party has planned to table a “counter-law” aimed at “radically changing the orientation” of France in relation to migration.

In addition to immigration, Jordan Bardella also raised the issue of pensions. While the government reform has to be presented this Monday in the Council of Ministers, the leader of the RN announced that his party will also “present a counter-reform” and “above all lead the opposition to this text to the National Assembly” with the current 88 deputies.

See also  Loss and Damage: Everything you need to know about this central theme of COP27
Share