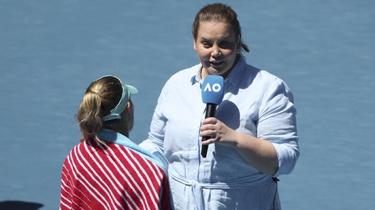 After his victory this Tuesday, January 24th against Czech Jiri Lehecka (6-3, 7-6, 6-4) who qualified for the semifinals of the Australian Open, Stefanos Tsitsipas invited his “favourite” as an actress. Margot Robbie.

Stefanos Tsitsipas was in a good mood this Tuesday at the Australian Open. Under the blow of the Czech Jiri Lehecka (6: 3, 7: 6, 6: 4), the Greek climbed into the semifinals in Melbourne for the third time in a row, where he meets the Russian Karen Khachanov (20th) hoping to reach the final of the first Grand Slam of the season. With a big smile, the 24-year-old appeared at the end of the meeting at Jim Courier’s microphone to describe his impressions of the Rod Laver Arena.

The world No. 4 has obviously not failed to greet the public and say all the good things he thinks of Australia. “Australia is a big country and Melbourne is the second largest Greek city in the world after Athens (where he was born, ed.). There are a lot of things I like about here,” he said before discussing his favorite actress, Margot Robbie.

“My favorite actress is from here, Margot Robbie. (…) It would be cool to see them here one day,” he said. In front of hilarious viewers, Jim Courier rushed to revive it about the actress revealed in ‘The Wolf of Wall Street’ and currently starring on the poster of Damien Chazelle’s Babylon.

“So you’re officially sending Margot Robbie an invitation to be clear?” asked the American. “Definitely,” replied the world No. 4. Margot Robbie, who has been married to British producer Tom Ackerley since 2016, remains to know the answer.