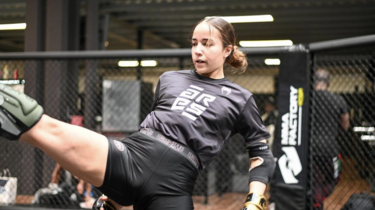 French fighter Assia Miri, who will compete at ARES 11 this Friday night, is part of the brand new generation of French MMA. Meeting with a champion seed.

This Friday, at the Dôme de Paris, during ARES 11, audiences can discover or rediscover Assia Miri. The young French MMA fighter will have her second fight in the octagon by facing Fabiola Pidroni. An opposition that was due to take place in December but the Italian was ill the day before the fight.

In any case, it is important not to rely on his age (19 years) and physique as a young man. Assia Miri clashes in the cage. It must be said that she knows martial arts. And that at a very young age.

Assia started Thai boxing when she was 6 years old. She has been a two-time world champion, ten-time French Muay Thai champion, with a total of 130 fights for 108 wins.

“I was in the fitness studio. And when I was 6 years old, I remember that next door was the boxing gym, she recalls. I’ve spent my life by the window. I really wanted to do it. At first my mother wasn’t all for it. Then she accepted in the end, she doesn’t regret it.

From ring to octagon

Then she decided to leave the Thai rings to enter the octagons of MMA. Another universe she loves, even if it was obviously complicated at first. “I was lost,” she recalls. I didn’t know where to put my hands, my body… it got me a little drunk, but I learned it with very good coaches.”

Licensed to the MMA Factory, Assia Miri has well-known trainers such as Fernand Lopez, who no longer needs to be demonstrated, or Damien Lapilus. Enough to allow her to climb the ladder and become an accomplished MMA athlete.

“I still have to improve,” she says. It makes sense, I started not long ago. But I like the cage. I feel good. I have no pressure.”

And this big fan of the Naruto manga will prove it again this Friday night at the Dôme de Paris.