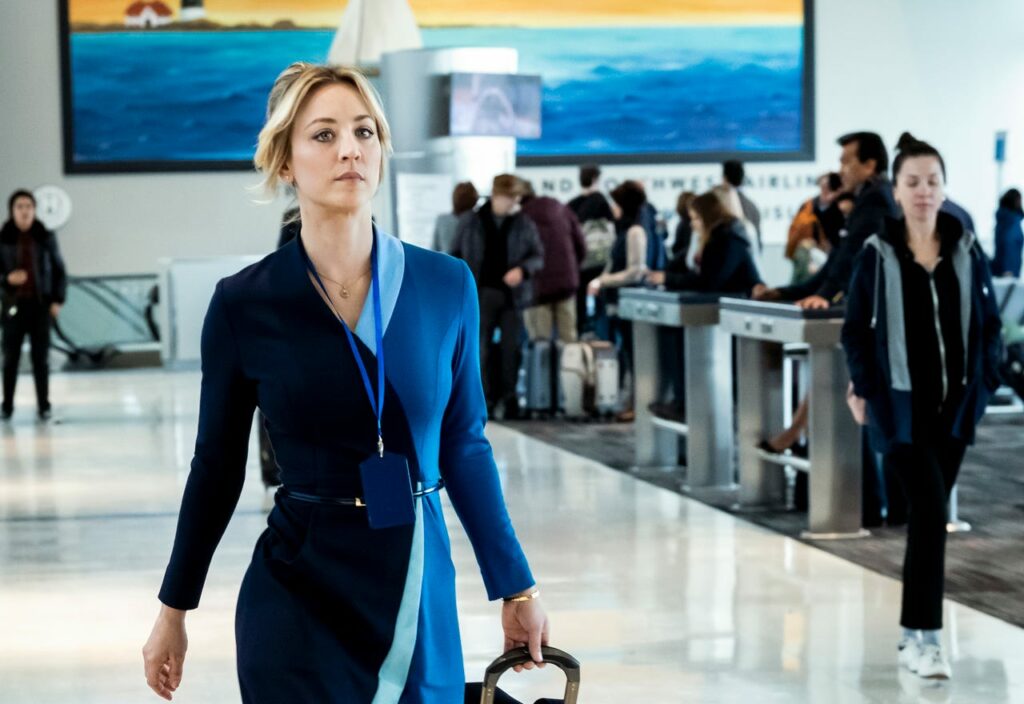 Are we watching or not? The flight attendant, murder, vodka and turbulence

Share
Contents hide
1 The Flight Attendant is very good entertainment, a cocktail of spy thriller and black comedy served up by an excellent Kaley Cuoco. The series airs on TF1 from February 8 at 11:40 p.m.
1.1 Also read: We’ve seen for you… Mare of Easttown, solid thriller starring a masterful Kate Winslet

Are we watching or not? The flight attendant, murder, vodka and turbulence

The Flight Attendant is very good entertainment, a cocktail of spy thriller and black comedy served up by an excellent Kaley Cuoco. The series airs on TF1 from February 8 at 11:40 p.m.

What is the flight attendant? Stewardess Cassie Bowen (Kaley Cuoco) enjoys life without complexes: she roams nightclubs, drinks too much and has one-night stands. After a night out in Bangkok, she wakes up in a hotel room next to the butchered body of Alex Sokoloff (Michiel Huisman), a businessman she met on the plane the day before. Cassie remembers nothing, she panics and flees to continue her flight to the United States. Questioned by Interpol and the FBI, she pretends to know nothing about the murder, but will in turn try to learn more about Sokoloff.

After 12 seasons in the skin of Penny in The big Bang TheoryKaley Cuoco returns to our screens The flight attendant, available on Warner TV. The actress bought the rights to the Chris Bohjalian novel on which the series is based: she had only read a draft of it, but under the spell of the heroine, Cuoco really wanted to play the role. It was also she who chose Steve Yockey as the screenwriter (supernaturalseries Scream), seduced by his attempt to deviate from the novel and adopt Cassie’s subjective viewpoint—in this case, an unreliable viewpoint given the character’s excesses and psychological instability.

See also  Strasbourg: end of the investigation into the attack on the 2018 Christmas market

The first episode is a perfect presentation of this charming young woman who can be described as a functional alcoholic: Cassie needs her daily dose of alcohol (preferably vodka) to go about her business. On the ground she spends her nights in clubs, bringing home strangers whom she leaves the next morning after a hot night out, struggling to convince her brother (TR Knight) that she is capable of taking care of her nieces To take care of. . During the flight, Cassie probably locks herself in the plane’s lavatory between shots of tequila for a moment’s fun with a handsome passenger. Her erratic behavior annoys the rest of the crew, especially her friend and direct boss Megan, who is fed up with covering up Cassie’s excesses and lack of professionalism.

Exactly on a flight to Bangkok, Cassie meets the handsome Alex Sokoloff. After an excessive night in the Thai capital, she wakes up with a hangover, hazy memories of her evening in a hotel room… and the butchered body of her partner at her side. Panicked at the prospect of being arrested and incarcerated in a country well known for its prison system, Cassie cleans up the crime scene and flees to the airport. Back in the USA, she and her colleagues are interrogated by the FBI, because Sokoloff wasn’t just anyone… Despite the investigators’ suspicions, the young woman pretends her innocence. And as the federal investigation unfolds, certain memories well up in his mind – most notably the presence of a certain Miranda in Bangkok. With the help of her friend Annie (Zosia Mamet), a cynical lawyer, Cassie tries to track down this stranger who may hold the key to the mystery.

But our stewardess can also count on an unexpected ally: Alex Sokoloff himself. The murder victim appears to him in hallucinations or in his imagination. Like a kind of projection of his subconscious, Sokoloff helps him progress in his research and draw conclusions, but also encourages him to question his self-destructive behavior. As the episodes progress, Cassie delves back into her childhood, realizing the reasons she has been drinking since she was a teenager and why alcohol and drug abuse are her crutches.

The flight attendant is a spy thriller mixed with comedy – like its hugely successful credits that evoke it Cold sweat one Alice in Wonderland with 2 grams of alcohol. By multiplying surreal scenes, humorous accents and moments of suspense, the series plays with several mysteries without ever taking itself entirely seriously. On the one hand, Cassie tries to find out what really happened that night, even if she puts herself in danger in the process; on the other hand, the FBI investigation advances and the noose tightens around them; The exchange with the dead is often as absurd as it is funny; finally, the young woman gradually confronts her past and her problematic childhood.

Throughout the story, the viewer walks hand in hand with Cassie, who is difficult not to fall in love with. It has to be said, Kaley Cuoco is absolutely brilliant, mastering drama, thriller and comedy at the same time, and the role also earned her a nomination for the next Golden Globes. The supporting roles don’t deserve it – let’s especially mention Rosie Pérez (Lipstick Jungle) that her friend Megan and especially a Michelle Gómez (dr Who Chilling Adventures of Sabrina) always charismatic.

The flight attendant has a few weaknesses: the conversations with the late Sokoloff are pretty superfluous and can get boring, the secondary characters lack some depth. Despite these caveats, this is a highly entertaining and addictive series full of rhythm and twists and turns with great enjoyment.

Starring an amazing Kaley Cuoco, The Flight Attendant offers us a journey as entertaining in its comic aspects as it is captivating in its espionage and criminal intrigues. Mixing genres, the series manages to keep tension and suspense up to the last moment. Or to a resolution that closes the season of a miniseries perfectly, but has been renewed for a second season due to its success. In the meantime, buckle up and get ready: with Cassie, the flight is about to get hectic.