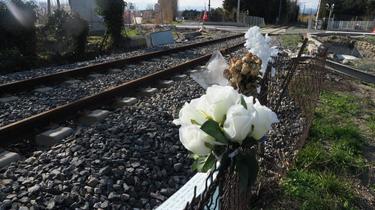 Ain: A TGV collides with a car at a level crossing, the driver of the vehicle is thrown onto the tracks

Ain: A TGV collides with a car at a level crossing, the driver of the vehicle is thrown onto the tracks

This Sunday, January 22, a collision occurred between a TGV and a car on a level crossing in Péronnas, near Bourg-en-Bresse in Ain. The driver of the vehicle, who was thrown onto the tracks, was evacuated to a hospital in Lyon as a matter of urgency.

This is the second accident of this type in a few days in Ain. On Sunday evening, a TGV collided with a car at a level crossing in Péronnas, near Bourg-en-Bresse.

The collision occurred around 10:15 p.m. near the Etang des Carronnières in Peronnas. According to our colleagues at Progress, “the circumstances of this accident are unknown at this time”.

There were no injuries among the 450 passengers on board the train. But the driver of the accident vehicle, a man of undetermined age, was thrown onto the tracks according to the fire brigade and then evacuated to a hospital in Lyon in an absolute emergency.

This TGV was scheduled to depart from Bourg-Saint-Maurice in Savoy and arrive in Paris just after midnight. However, due to this accident, there was only a delay in arrival at Gare de Lyon around 4am.

This accident at a level crossing is the second of its kind in just five days in the region. The first had taken place a few days earlier after a vehicle was spotted stopped on the tracks at Chazey-sur-Ain.