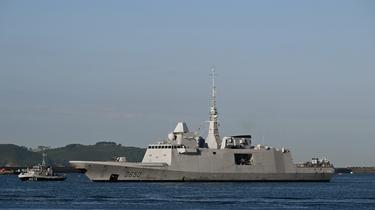 A Russian warship loaded with missiles seen off Boulogne-sur-Mer

A Russian warship loaded with missiles seen off Boulogne-sur-Mer

A Russian military ship passed the Strait of Pas-de-Calais off Boulogne-sur-Mer this Wednesday, January 11, according to consistent sources.

Its passage was closely guarded. The war frigate Admiral Gorchkov passed the Strait of Pas-de-Calais and passed Boulogne-sur-Mer on Wednesday January 11, France 3 announced on Thursday.

This ship was discovered by the maritime authorities thanks to the transponder, a system that tracks the movements of boats.

Last week, the President of the Russian Federation Vladimir Putin announced that this boat, loaded with the world’s most powerful missiles, the Zircons, is preparing to serve as part of the war in Ukraine.

135 meters long and a war machine

According to our colleagues at La Voix du Nord, this 135-meter frigate would be equipped with 16 front missile launch tubes, a 130mm main gun, an S-350 surface-to-air missile system, torpedoes and a Palash system. It is also equipped with a Kamov Ka-27 helicopter and additionally carries Kalibr subsonic cruise missiles, weapons used during the Russian Army’s bombing of Ukraine.

On board, 210 Russian sailors would form the crew. To date, this ship is the only one primarily equipped with the Zircon, which remains the only hypersonic cruise missile in the world capable of speeds up to five times the speed of sound with a range of 1,000 km.

According to the Russian Defense Minister, the war frigate Admiral Gorchkov will be used during a long mission in the Atlantic, Mediterranean and Indian Oceans.