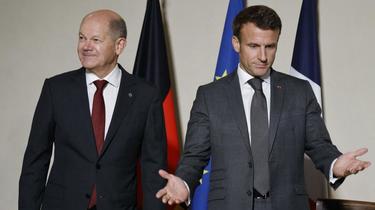 60 years of the Elysée Treaty: Paris and Berlin this Sunday despite tensions

60 years of the Elysée Treaty: Paris and Berlin this Sunday despite tensions

After being postponed twice, the Franco-German Council of Ministers will take place in Paris this Sunday, January 22nd. The day also corresponds to the 60th anniversary of the Élysée Treaty. It will be marked by speeches from the Presidency and the National Assembly.

A busy day dedicated to the Franco-German alliance. After being postponed twice for official reasons due to “logistical difficulties”, the Franco-German Council of Ministers will finally take place this Sunday, January 22 at 1 p.m. in the Élysée Palace.

The choice of this date is no coincidence, as it corresponds to the 60th anniversary of the Élysée Treaty, signed on January 22, 1963, celebrating a friendship between France and Germany. The Council “will thus contribute to strengthening the bilateral partnership in the areas of security and defence, economy, industry and energy,” announced the Elysée.

A Franco-German parliamentary session in the National Assembly

France and Germany will discuss their coordination at European and international levels, “particularly in unwavering support for Ukraine,” the palace stressed.

The day is scheduled to begin around 10.30 a.m. in the Pantheon with a press conference by Yaël Braun-Pivet and Bärbel Bas, the respective Presidents of the National Assembly and the Bundestag.

The Franco-German Council of Ministers will be preceded by speeches by President Emmanuel Macron and Chancellor Olaf Scholz at the Sorbonne, followed by a Franco-German parliamentary session in the National Assembly.

A CONCERT POSTPONED TWICE DUE TO TENSIONS

The day will end with a press conference at the Élysée Palace by the two heads of state, who will have dinner together at the end of the event.

Celebrations of the 60th anniversary of the Élysée Treaty are linked to tensions between France and Germany.

Due to differences, particularly related to the Russian-Ukrainian conflict, the Franco-German Council of Ministers was postponed from July to October 2022 and then again to January 22.