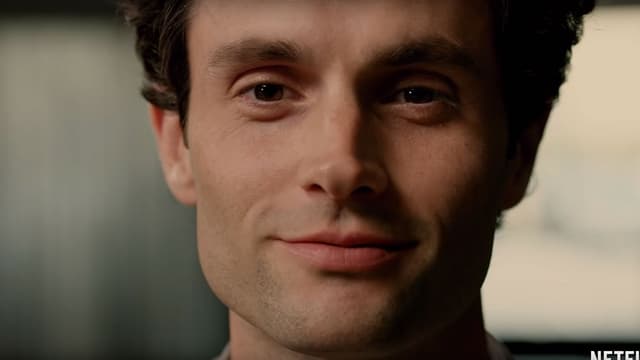 5 things to know about the You series

Share
Contents hide
1 To commemorate the release of season 4 of the series You February 9th, here are some things you should know!
1.1 1. The series is adapted from a book
1.2 2. Lead actor Penn Badgley almost turned down the role of Joe Goldberg
1.3 3. Penn Badgley knew nothing about social media before the show
1.4 4. Shay Mitchell would have loved to return as Peach’s twin sister
1.5 5. The lead actor has already experienced discomfort from certain scenes in the series.
1.5.1 Also read: Vortex VR: We tested the series’ virtual reality experience

5 things to know about the You series

To commemorate the release of season 4 of the series You February 9th, here are some things you should know!

1. The series is adapted from a book

It is an adaptation of the first two novels in Caroline Kepnes’ literary trilogy. The story is about a young bookseller in New York who falls head over heels in love with a woman. However, the latter will quickly take on the rather frightening appearance of a frantic stalker spying on this woman’s smallest actions and gestures. Especially through social media. From season 2, however, the series took liberties with the book.

Initially, the actor wasn’t convinced at all about playing the role, the former Gossip Girl cast member explained in an interview that he was “very divided” because nobody conflicted with the nature of the role being engaged him for a long time. He confided in the site iNews in December 2018 » I I couldn’t decide, I was like, ‘I wish you the best, I hope you find someone. But I’m not sure I want to do that.” For six months a year, for possibly six years. That’s how television works. It’s very different from the cinema.«

3. Penn Badgley knew nothing about social media before the show

Social networks actually play a big role in the series, because that’s how Joe invades Beck’s intimacy. It is also thanks to the networks that he conceals many murders in order to get closer and closer to his beloved Beck. But the actor who plays Joe, Penn Badgley, knew nothing about networks before the series. He also reached out to one of the show’s actresses, Shay Mitchell, who ironically suggested Tumblr or MySpace. That made netizens laugh.

4. Shay Mitchell would have loved to return as Peach’s twin sister

The actress, who plays Peach, the wealthy and cunning friend of Joe’s beloved wife, loved her role. The latter shared the fact that she adores Penn and even suggested ideas to the series writers to be able to reappear in the series. The actress explained this to the magazine elle, for an interview in 2019: “I knew Peach was going to die. But I loved doing this series so much. And I love Penn, he’s one of my favorite people! When I was on set I was like, ‘You know, I don’t have to go. Peach may have a hidden twin sister, Lychee! Lychee Salinger! She is determined to get revenge. It could totally work!’ »

5. The lead actor has already experienced discomfort from certain scenes in the series.

Penn Badgley even confessed: “There are things I did with fake bodies this Season 2 that were a bit gross, I have to say. » It’s easy to see that playing a sociopathic assassin doesn’t have to be that easy, and hasn’t for years. This has also made the actor reluctant to play this role as it is a commitment that will last 6 years. What exactly bothered him during the shooting, he had shared on site entertainment tonight in June 2019:“These are the times I’m trying to play Joe living in this house, trying to come to terms with what he’s done, where it’s a lot more complicated than doing anything right now, be it, Hitting Shay Mitchell in the head with a rock or stabbing someone in the neck. »