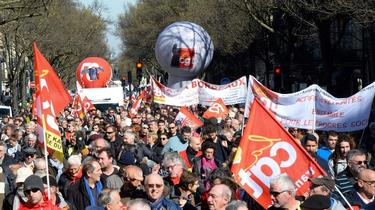 19 January Strike against pension reform: All police unions present at the demonstration

19 January Strike against pension reform: All police unions present at the demonstration

All police unions will take part, with their union umbrella, in the joint demonstration planned for Thursday 19 January in Paris against pension reforms.

An increasingly general mobilization. All police unions take part in the demonstration against the pension reform on 19 January.

In fact, the majority union bloc, made up of 13 unions representing police officers and technical, scientific and administrative staff, led by Alliance-CFE-CGC and Unsa Police, called for participation in next Thursday’s rally with a clear slogan: “We don’t touch the special status of the police.”

#Retreat : The union bloc joins the movement and calls for participation in the procession under the banners UNSA Police FASMI and Alliance Police Nationale CFE-CGC on January 19 at 12:00 p.m. in Place de la République! #Mobilization pic.twitter.com/K4ZvB5UD2I

A right to keep

Each union will march under the banner of its headquarters.

As a reminder, police officers do not benefit from a special regime. They are considered “active categories” and are entitled to early departure due to “their risk exposure”.

This right will be retained, but with the reform, police officers will not be able to claim their right to retirement until they are 54 or 59, depending on their profession, as opposed to the current 52 and 57 years.

The strike against the pension reform is set to begin on January 19 with great fanfare. Certain sectors such as transport or education are likely to be particularly affected.